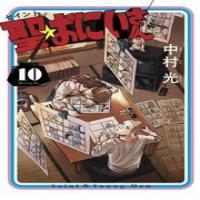 N/A, it has 5 monthly views

Saint Oniisan is slice-of-life, or divine-life,

tale of Jesus and Buddha as they try to experience the modern world:

in this case, Japan. The manga places a funny twist on religion,

attitudes, culture and customs in Japan through the eyes of Jesus and Buddha.

Throughout the manga, we get a little history of their divine greatness only to see

Suffice to say, before people can recognize

that they’re actually Jesus and Buddha, people think of them

as someone who looks like Johnny Depp or a guy with a button on his forehead. For real.

Note: Won the Tezuka Osamu Short story Award in 2009 and it was nominated for the 2nd Manga Taisho Award in 2009.

Guardian Of The Witch

Originally A Lady With One Line

The Return of Elena the Knight