Hanging Out With a Gamer Girl 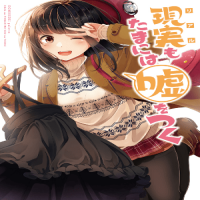 Kaoru Terasaki is a gamer who’s into MMORPGs, and he’s finally meeting up with someone he’s been friends with in-game for a long while—this time, offline and in person. He’s worried that his friend will be disappointed to see Kaoru is a guy, unlike his female character in the game. But he’s the one who’s in for a surprise when, instead of another guy, his friend turns out to be a cute girl, Nanami Osaka.

On top of that, Nanami told her parents that she would be bringing a friend over—a female friend. Even worse, Nanami’s dad is the super overprotective type who won’t allow any guys near his daughter. There’s only one solution to this dilemma: Kaoru has to cross-dress as a girl! Will Kaoru’s efforts pay off in the end?! Will Kaoru and Nanami remain just friends, or will their time together IRL change everything? Follow their romantic-comedy adventures to find out!

I Dream of Health, Wealth, and a Long Life