Fox Volant of the Snowy Mountain 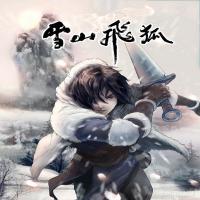 N/A, it has 0 monthly views

Based on Jin Yong’s novel of the same name.

After the Dashing King seized the capital, all the generals of the Ming dynasty surrendered and gave their wealth as tributes to save their own lives. In a few days, gold and silver piled up like a mountain. After the Dashing King retreated from the capital, he sent his trusted subordinates to hide the treasure somewhere beyond the Great Wall, intending to use it as a military fund to make his comeback.

In the 45th year of Emperor Qianlong’s reign (1780), three groups of people started fighting over a treasure box somewhere in Changbai Mountains. The box content did not merely revealed the location of the Dashing King’s treasure hoard. It also revealed the past related to the Dashing King’s four personal guards as well as the plots and grievances of several generations.
Notices:
The Dashing King (Li Zicheng) was the Chinese rebel leader who overthrew the Ming dynasty of China in 1644. He was later forced to abandon the capital city as the Manchu Banner Armies invaded. The Dashing King himself appeared in later chapters of The Deer and the Cauldron (鹿鼎记).

A Collection Of Peculiar Happenings

Beauty And The West Chamber