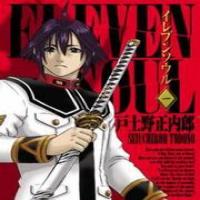 In the mid 21st century, the human race is facing a test.

Genetic engineering has changed the world, and with huge profits,

research had accelerated accordingly. An “immortality” gene no longer seemed like

a mere dream. However, a lab sample containing this gene escaped, creating a new life-form that took in genetic material from the natural world, evolving into an enemy that began to invade the human world.

The “Shaher” are now a force capable of defeating human military forces,

and both North and South American continents have fallen under their control.

In Japan, the government has created a “Samurai” unit to oppose the Shaher,

utilizing soldiers enhanced with nano-machines to connect with an armored exoskeleton.

It is at this point that Tsukahara Takemichi is assigned to the first platoon of the “Samurai Force”.

Daughter of the Archmage

Tate no Yuusha no Nariagari