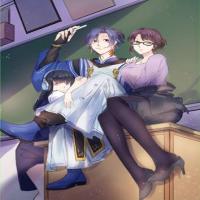 He used to be the most ruthless emperor in the immortal world, knocking down all his fellow immortals.

He had tamed and ridden a Golden Dragon, turned a White Tiger into a cat, and made a phoenix into fried chicken.

Now he has returned to the urban life and become an ordinary teacher for chitchat. Girls, get your clothes on, I’m here to teach you some manners!

The Magic Chef of Ice and Fire