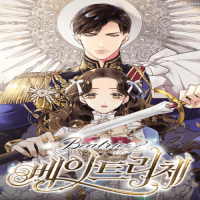 N/A, it has 9 monthly views

Having previously been a slave in her youth,

Chloe was revealed to be an illegitimate child of the King of Elpasa,

and is raised to the level of a Princess and renamed Beatrice,

all in order to secure a political marriage to a toady man,

as the king was unwilling to marry his legitimate daughters to him.

After two years of hellish marriage, the Kingdom of Elpasa falls before the blade of the Empire’s Archduke, its greatest hero. In order to survive her new enslavement Princess Beatrice re-assumes the guise of ‘Chloe’ as a slave of the Empire. But then, she catches the eye of that very same hero…

The Archduke wonders who is this squirrelly short-haired young woman, who is so surprisingly educated for a slave, and who is terrified of him, not knowing that he butchered the Elpasa Royal Family in front of her and enslaved her himself. What will become of them, since she proves to be one of his only sources of levity?

The Looks of Love: The Heart Has Its Reasons

If You’re Gonna Dress Up, Do It Like This

An Hour Of Romance