A Spirit of the Sun 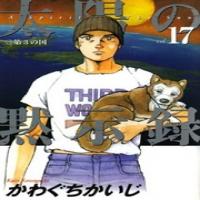 the country fragmented and its people devastated.

the Asian mainland and try to solve the political task of rebuilding their nation.

The setting is directly lifted from

“Nippon Chinbotsu,” (Japan Sinks) while many of

the characters are allegorical to the key players in

the characters in A Spirit of the Sun closely to spot these resemblances.

From Kaiji Kawaguchi, the author of Silent Service,

Eagle and Zipang (as well as the artist for Confession).

A Spirit of The Sun received

the 2006 Shogakukan Manga Award for

the seinen/general category along with

The Duchess with an Empty Soul